Today, the Red Bull Air Race World Championship is known as the fastest and most exhilarating motorsport competition ever. The competition was conceptualized in 2002, and executed for the first time in 2003. The concept was to create the most advanced aerial challenge in existence, and the expectations were quickly met and exceeded. The Red Bull Air Race World Championship quickly gaining mass interest from pilots and fans alike.

This race is now a huge spectacle with its combination of low altitude, high speed, and extreme maneuverability. These characteristics are what attract the top 14 pilots in the world to spend months fighting to win the title of World Champion.

In order to win, these pilots must navigate their way around an aerial racetrack, maneuvering through 82 feet high pylons with minimal spacing and extreme accuracy. The goal of each race is to get the highest points by flying the fastest possible time and collecting the least amount of penalties. At the end of each Race Day, pilots are awarded points based on which place they finished in, and at the end of the nine month race season, the pilot with the greatest number of points is named the Red Bull Air Race World Champion.

The Master Class category is the group of pilots all spectators come to see. They’re the best of the best, and the ones battling for the title of 2017 Red Bull Air Race World Champion. Here’s a rundown of what these pilots’ schedule looks like: 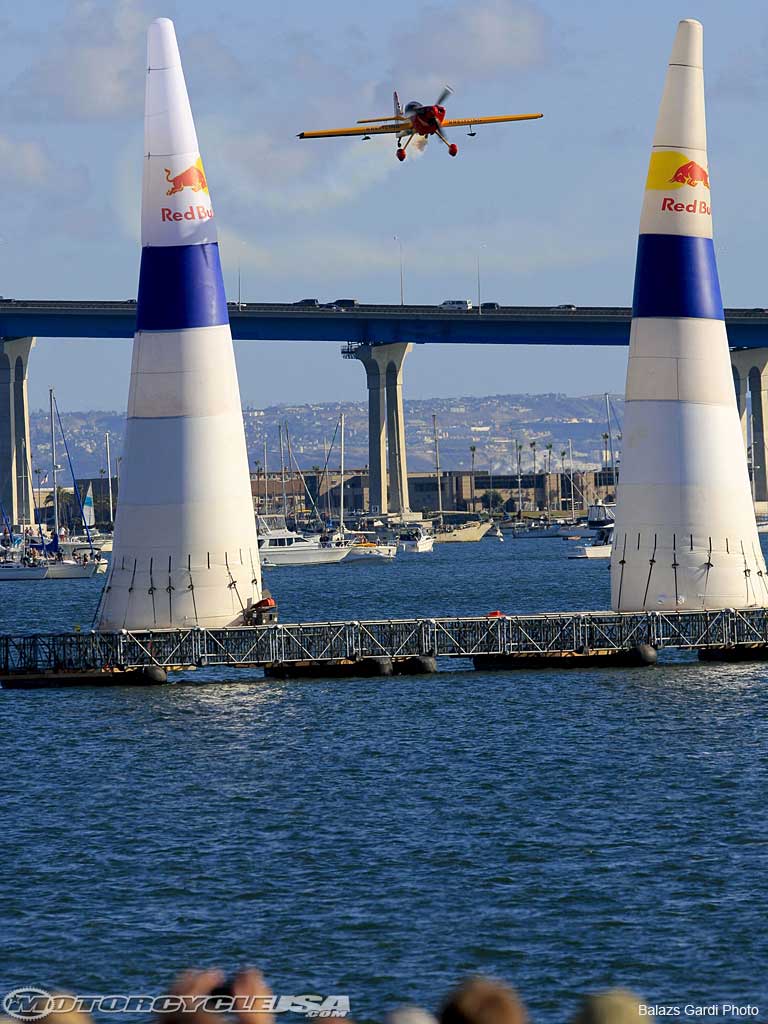 In addition to the competition to become the 2017 Red Bull Air Race World Champion, there is another race which takes place during each event: The Challenger Cup. This is a division of newer pilots who are just dipping their toes in the world of thrilling motor sports. In this division, nine pilots race to develop their low altitude flying skills within racing conditions. By adding this introduction to the sport, safety is increased as pilots get a taste of the true competition before entering the Master Class category.

With only one stop under their belt, the pilots are all standing an equal shot at first place for the 2017 season. Thus far Martin Sonka from the Czech Republic is in first with 15 points, followed by Juan Velarde of Spain with 12 points, and Pete McLeod of Canada with 9 points.

Cirrus Aircraft is sponsoring Michael Goulian, who took 6th place in Abu Dhabi, but has much higher expectations for his time in San Diego. After taking home the first DHL Fastest Lap of the season, Goulian and the entire Cirrus team are eager for the next race to be under way.

As senior Trevor Rogers was taxied onto the Montgomery Field runway, he took a deep breath.

And with that short exchange, Trevor was granted permission to fly the Cirrus SR-20. He leaned forward, closed his preflight checklist, and pulled onto the strip. As he began to pick up speed to prepare for takeoff, his face tensed slightly in anticipation. “When you’re taking off, it’s like, ‘Well, there’s no turning back now,’” Trevor said. “For the most part, once you’re going [on the runway], you have to get airborne. You can’t just stop and turn around.” Turning back isn’t something that Trevor would do though, not after all of his hard work. For him, earning his private pilot’s license last July was just one step in his ultimate dream of becoming a fighter pilot in the Air Force. “I’ve wanted to be in the military since I was little,” he said. “But when I was little, flying [didn’t seem like] a reality. When I actually went to the [Air Force Academy’s] summer seminar though, it became a reality.”

For a reality though, it was one that didn’t come easy. While earning his license, he had his grades to keep up and flight school, which dominated a large chunk of his time. And, since Trevor hopes to earn for a spot in the Air Force’s highly competitive Undergraduate Pilot Training (UPT) program after college, both his high school and college GPA need to be near perfect.

Trevor is stepping up to the challenge though. Ending the year with his GPA above a 4.0, his license gained, and even an $18,000 AFROTC scholarship, all that is left for Trevor is to keep moving forward and to keep doing what he loves—flying.

Winter is a popular time to travel.  Everyone wants to visit to family, friends, go skiing all in different areas of the country in a short holiday season.  Although winter weather conditions can create higher risk challenges, many pilots can’t help but to continue experiencing the wonders of aviation during the winter months.

If you plan on flying on your own this winter, you can have a safe and enjoyable experience, as long as you take a few extra precautions and spend a little more time planning.

Before taking flight in the winter, the last precaution you must take is going through this additional pre-flight checklist for cold weather conditions:

In order to avoid plane stalling, rolling, pitching or, in the worst-case scenario, total plane failure, it is necessary to study your icing charts before you fly if there’s any remote possibility of cold weather conditions during the course of your flight. There are several different options to help you understand what the potential for icing is. According to aviationweather.gov, there are four types of icing charts:

During initial training, Coast flight training students experienced a 98% pass rate. This high pass rate is a testament to the quality of the company’s experienced & knowledgeable flight instructors & the innovative flight training methods employed by Coast Flight. Nathan Linder recently passed his IFR checkride in a Cirrus SR22. Two days after the checkride, Coast Flight Training President, Will Dryden, instructed Linder on flying to Mexico, making it possible for Linder to take his wife on a surfing trip to beautiful Cabo San Lucas. It’s just one more way in which flight training makes a big difference in the lives of Cirrus pilots!

Will Dryden is the President and founder of Coast Flight Training. He is a career instructor with both Master Flight Instructor and Gold Seal Certified Flight Instructor designations. Will founded Coast with the focus of breaking aviation flight training paradigms (www.iflycoast.com).

The perfect way to reduce students’ anxiety about radio communication is to start by explaining to them that the air traffic controller they’re talking to is most likely wearing shorts and a Hawaiian shirt, and sipping a cup of Joe. He or she is nothing to be afraid of. The job of the ATC is to keep the pilots safe and help them when they have questions.

Here are some simple steps to improve students’ radio calls:

Radios are often difficult for students. Air traffic controllers talking fast can be intimidating, creating a psychological “mountain” for the student. Reminding students that they’re just talking to that guy in the Hawaiian shirt enjoying his coffee can generally ease a lot of the pressure, and by identifying themselves as “student pilot” will alert the ATC to give them the extra attention they need and deserve.

Coast Flight Training welcomes our newest Cirrus to the fleet. N788JN is a 2004 Cirrus SR20 that comes with WAAS and Traffic system upgrades. The aircraft was bought in Oregon and will be delivered next week.

As you can see on the Multi Function Display a strong cold front was approaching Aurora State Airport when Will took the airplane for the test flight. All he said was “this is not San Diego weather for sure!” Winds were 170@17 gusting 33kts, Moderate Turbulence and rain really starting to come down hard! Besides the nasty weather the plane flew flawless and will be an amazing addition to the Coast Flight Training Fleet!

The term “mountain flying” may conjure up romantic images of aircraft flying over a spectacular mountain ranges with the orange and yellow sunsets gleaming over the horizon.  Such images of mountain flying are very romantic indeed, however, are quite simplistic as well.  As any pilot, with experience flying in mountainous areas, knows, soaring within this high territory can be far more grueling and dangerous that it appears. END_OF_DOCUMENT_TOKEN_TO_BE_REPLACED 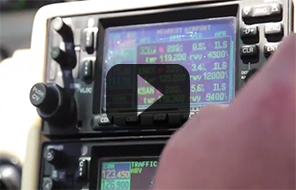